Father Mourad: Defeating ISIS Within a Cell of Prayer

ALETIEA  As head of Mar Élian monastery and of Qaryatayn parish, near Palmyra, Father Jacques Mourad was abducted by members of the Islamic State on May 21, 2015.

He remained in captivity for four months and 20 days, over 140 days, before being able to return, on October 10, to “the free world”.

Threatened with beheading several times if he did not convert to Islam, whipped and subjected to a mock execution, Father Mourad’s prison experience was a true way of the cross.

In an interview with L’Orient, Le jour, he recounts in detail the ordeal he went through.

“The first week was the hardest: After being held for several days in a car, I was taken, on Pentecost Sunday, to Raqqa. I lived those first days in captivity torn between fear, anger and shame,” he says.As head of Mar Élian monastery and of Qaryatayn parish, near Palmyra, Father Jacques Mourad was abducted by members of the Islamic State on May 21, 2015. He remained in captivity for four months and 20 days, over 140 days, before being able to return, on October 10, to “the free world”.

Threatened with beheading several times if he did not convert to Islam, whipped and subjected to a mock execution, Father Mourad’s prison experience was a true way of the cross. In an interview with L’Orient, Le jour, he recounts in detail the ordeal he went through.

“I felt that through him, it was the Lord speaking to me.”
On the eighth day, an individual dressed in black entered his cell. While the priest believed his end was near, the man struck up a conversation. Father Mourad asked why he had been abducted. “Consider it a spiritual retreat,” replied his jailer.

“From then on, my prayer, my days took on a meaning, says the Syrian priest. How can I explain? I felt that through him, it was the Lord who sent me these words. That moment was a great comfort to me. Through prayer, I was able to regain my peace, said the priest. It was May, the month of Mary. We began to recite the rosary, which I did not pray much before.

My relationship with the Virgin was renewed by it. St. Teresa of Avila’s prayer ‘Let nothing disturb you, nothing frighten you …’ also sustained me. One night I made up a melody for it which I started to hum. Charles de Foucauld’s prayer helped me to abandon myself into the hands of the Lord, well aware that I had no choice. For I had every indication that either I converted to Islam, or I would be decapitated.”

“God gave me two things, silence and friendliness”“Almost every day someone entered my cell and asked me about my faith. I lived every day as if it were my last. But I did not give in. God gave me two things, silence and friendliness. I knew some answers could provoke them, that just one word can condemn you. Thus, I was questioned about the presence of wine in the convent. The man cut me off when I started to answer. He found my words unbearable. I was an ‘infidel’.

Through prayer, the Psalms, I found a sense of peace that never left me. I also remembered Christ’s words in the Gospel of St. Matthew: “Bless those who curse you, pray for those who persecute you.” I was happy to be able to live out these words. It is no small thing to be able to live the gospel, especially those difficult verses, which were previously only theoretical. I started to feel compassion for my captors.”

“Occasionally, poetic songs by Feyrouz also came back to me, especially one of them which spoke of dusk, which I sang when the long nights of June fell on Raqqa and we were left in the dark. Even these words and their music became a prayer. They spoke of the suffering ‘inscribed in the twilight’.”

“I forgave my tormentor even as he whipped me”Suddenly, on the 23th day, his captors reappeared: “It was a kind of staging. The flagellation lasted some 30 minutes. The whip was made of a piece of garden hose and ropes. I was in physical pain, but deep down inside, I was at peace. I had great comfort in knowing that I was sharing something of Christ’s suffering. I was also extremely ashamed, as I felt unworthy to have even a small share in our Lord’s suffering. I forgave my tormentor even as he was whipping me. From time to time, I gave a comforting smile to the deacon Boutros, my fellow prisoner, who could hardly bear to see me being whipped so.

Later, I remembered the verse where the Lord says that it is in our weakness that his strength is manifested. I was continually amazed because I knew that I was weak, both spiritually and physically. You see, I suffer from a bad back since childhood and the prison conditions were such that the pain should have grown greater. At the monastery, I had a special mattress, an ergonomic chair. In prison, I slept on the floor, and there was no way to do any walking.”

“I experienced the greatest fear a little later, said Father Mourad, when a man armed with a knife entered our cell. I felt the blade of the knife on my neck and I had the feeling that the countdown for my execution had begun. In my fright, I recommended myself to God’s Mercy. But it was only a horrifying sham.”“Christians from Qaryatayn have been bothering us about you”On August 4, the Islamic State seized Qaryatayn. The next day at dawn, the population is taken hostage and taken to Palmyra. A few days later, a Saudi sheikh entered the priest’s cell: “Are you Baba Jacques?” he asked. “Come! Some Christians from Qaryatayn have been bothering us about you!”

“I thought that I was being taken away to be executed. Sitting in a van, we drove for four hours straight. Beyond Palmyra we took a mountain path that led to a building secured by a large iron door. When it was opened, and what did I see? The whole population of Qaryatayn, amazed to see me. It was a moment of unspeakable suffering for me. For them, an extraordinary moment of joy.” 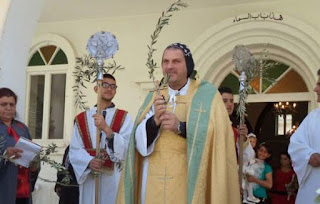 Twenty days later, on September 1, we were brought back to Qaryatayn, free but we were forbidden to leave the village. A collective religious contract was signed: we were now under their protection (ahl zemmé), upon payment of a special fee (jezyé) which non-Muslims have to pay. We could even practice our rites, provided that it not offend any Muslims.
A few days later, after the death of one of my parishioners, who died of cancer, we went to the cemetery, near the Monastery of Mar Elian. Only then did I notice that it had been razed to the ground. Curiously, I did not react.

Inwardly, I seemed to understand that Mar Élian had sacrificed his convent and his cemetery in order to save us.”

A few days later, Father Mourad defied the ban of leaving the city to return to the free world.

“Today, he says, I still feel for my captors the same feeling I had for them when I was their prisoner: compassion. This feeling comes from my contemplation of God’s gaze on them, despite their violence, which is the same one that he has for every man: a gaze of pure Mercy, without any desire for revenge.

I know that prayer is the way of salvation. We must continue to pray for the bishops and priests who are still missing and about whom we know nothing. We must pray for my brother, Father Paolo Dall’oglio (disappeared from Raqqa in July 2013). We also need to pray for a political solution in Syria.”

Translated from the French by Liliane Stevenson.