A Ukrainian priest and historian discusses the crisis in Ukraine.

The Reverend Doctor Athanasius D. McVay specializes in the 20th-century history of Vatican diplomacy and of the Ukrainian Greek Catholic Church. He co-edited a publication of Vatican archival documents on the 1932-1933 Holodomor famine in Ukraine, and has recently completed a major monograph on Blessed Nykyta Budka, Canada’s first Ukrainian Greek Catholic bishop. Novelist and European correspondent Dorothy Cummings McLean spoke to him last week for CWR about the ongoing crisis in Ukraine. 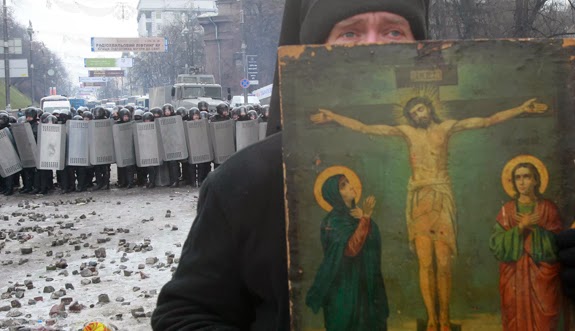 CWR: I could hardly believe my eyes when I read that the regime’s Culture Minister had threatened to “ban” the Catholic Church in the Ukraine. Were you surprised by this?

Father McVay: A letter was sent by an assistant to the minister threatening to “re-assess” the status of the Ukrainian Greek Catholic Church if it continued to celebrate the holy services on the Maidan. The minister later denied any knowledge of the letter. This is part of a long intimidation by the current regime against the Greek Catholic Church because the Church speaks out for freedom and justice and against corruption. [Read more on Catholic World Report]