By Christopher B. Warner 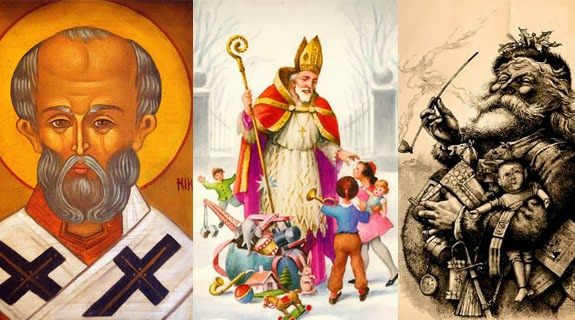 Everyone loves jolly ol’ Saint Nicholas. There is something romantic and cozy about telling Santa stories around the crackling fire. He is an icon of the Christmas season.

But not everyone agrees about the real Santa Claus.  Some like to picture Santa as the early-19th century, pipe-smoking elf with a bucket full of coal for naughty boys who don’t eat their cauliflower. Others prefer Santa as an emasculated, overweight consumer who gets bossed around by Mrs. Claus and thus flees the North Pole once a year to relive the glory days. Then there is the wiry bishop who pulled Arius’ beard and punched him in the face for teaching heresy. Maybe they’re all the same guy. A 1,700-year-old hero can’t be expected to fit into just one old Santa suit. Our images of St. Nicholas seem to evolve or deteriorate based on the values of contemporary culture in different times and places.

In 1809, Washington Irving wrote Knickerbocker’s History of New York, a work of imaginative fiction that included several tales about a jolly, elfin Dutchman scampering down chimneys to bring gifts to children. The American image of Santa Claus was solidified during this time period. “A Visit from St. Nicholas,” a poem by Clement Clarke Moore published in 1823 and better known as “’Twas the Night Before Christmas,” introduced the enduring image of Santa’s reindeer and sleigh and fixed the date of his visit to Christmas Eve. These are fun stories that make up an important part of our literary tradition and culture in America.

However, stuffing chimney-hung stockings is an ancient tradition that pre-dates the American elf lore as well as the Dutch, who fill their children’s wooden clogs with gifts the night before St. Nicholas Day (December 6). Chucking gold into people’s wet socks is a custom started by a young man named Nicholas who lived in Asia Minor around 300 AD.

There are hundreds of stories about St. Nicholas of Myra. He was born in Lycia on the southwest coast of modern Turkey. His wealthy, pious parents, Theophanes and Nonna, read to him the Holy Scriptures and faithfully taught him his prayers, but apparently died while he was still young. His uncle, Bishop Nicholas of Patara, ordained young Nicholas and made him his personal assistant. The zealous youth proved himself an inspiring catechist in the Christian community and an obedient servant to his uncle. During these dutiful years he showed great kind-heartedness and generosity by distributing his inheritance to the poor.

During this time, the three grown daughters of a formerly rich inhabitant were in danger of being sold into slavery because of their father’s pennilessness. Hearing of this, young Nicholas secretly visited the man’s house at night and threw gold in at the window to provide a dowry for one of the girls. The eldest daughter was soon married, and Nicholas again made clandestine donations for the other two daughters, with equally felicitous results. Modern children who awake to an orange or to gold-foiled chocolates in their stockings reenact this story because, by all accounts, one of Nicholas’ gifts landed in a sock that was hanging by the fire to dry.

The young Nicholas was blessed with a pilgrimage to the Holy Land. During the voyage, a storm came up that terribly frightened the crew but, through the prayers of the saint, the waves of the sea were becalmed and the passengers saved. According to Palestinian Christians, Mar Nkoula (St. Nicholas) lived in a cave as a hermit for three years after visiting the holy places. In a vision Nicholas was told to return to Lycia. Years later an Orthodox Church was built over the hermit’s abandoned cave at Beit Jala, and Palestinians still commemorate this saint by giving gifts to children on December 19.

Not long after his return to Asia Minor, Nicholas was made archbishop of Myra. Difficult years followed for the archbishop and his flock, who were forced underground by the Roman Emperor Diocletian’s brutal, expansive persecution of Christians. During this time the good archbishop, who had the charism of bi-location, often appeared to imprisoned members of his flock as a model of gentleness, kindness, and love, until the day he too was discovered in hiding. In jail Nicholas continued to sustain and exhort his fellow believers to endure torture and death for the love of Christ. After Diocletian’s death, Nicholas was released and returned to his sacramental duties as a “confessor of the faith”—a titled given to Christians who were imprisoned and tortured for their faith during this period, but not executed. They were extremely revered and respected by their contemporaries.

Archbishop Nicholas attended the first Ecumenical Council at Nicaea (325), where he allegedly assailed the heretic Arius. In the middle of his hearing, Arius stood up on his seat in order to be better heard. Enraged by Arius’ denial that Jesus Christ is true God and true man, Archbishop Nicholas strode quickly over to Arius, pulled him down by his beard, and punched him in the face. The scandalized council fathers sprang upon Nicholas, stripped him of his pallium, and threw him in prison for his brutish behavior. That night Nicholas was visited by the Holy Family who loosed his bonds and vested him again in his apostolic garb. The bishops were astonished by this miracle and realized that Nicholas’ anger was righteous. He was honorably restored to his chair—where the aged prelate slept through much of the remaining proceedings.

During one of these naps, the holy confessor of orthodoxy bi-located again, this time to save more sailors at sea. When he awoke in Nicaea he was resentfully charged with sleeping through the entire council, whereupon the venerable Nicholas is said to have answered, “While you were talking, I was busy rescuing a disaster-driven ship at sea.” Some of the pious brethren took the ship to be an analogy of the Church. Others dismissed his words as the babblings of an old man. But not long after the council, the rescued sailors returned safe home and, traveling through Myra, recognized Nicholas as their deliverer. Not surprisingly, every Greek and Slavic Christian sailor for the past millennium and a half has sailed under the protection of St. Nicholas. In the midst of a storm, Greek sea captains still keep the ancient custom of promising St. Nicholas an effigy of their ship, called a tamata, if the holy wonderworker will save them from calamity.

Archbishop Nicholas peacefully fell asleep in the Lord on December 6, 343. He was immediately recognized as a saint and as the patron of travelers. He is called upon by Christians round the world for deliverance from flood, poverty, or any misfortune. He has especially promised to help those who remember his parents, Theophanes and Nonna.
St. Nicholas’ incorrupt relics were venerated for centuries in the local cathedral church of Myra. Like those of many other saints, his bones exude sweet-smelling myrrh. This holy myrrh has been used by Christian faithful to heal all manner of infirmities. During the Middle Ages the Turks conquered Byzantine Asia Minor and hitherto pose a constant threat to Christianity in that region.

Because St. Nicholas is the patron saint of sailors, his stories have spread to every Christian nation. In 1087, solicitous for the safety of St. Nicholas’ venerable remains, Italian sailors, who were devoted to this saint, plotted to steal the body and bring it back to their home village. St. Nicholas’ relics were thus taken from Myra and translated to the city of Bari, where the saint’s body continues to exude holy myrrh (in Italian, “sacra manna”) 17 centuries after his death.

A thousand years later, Italians are still hardcore devotees. It is difficult not to envy them sometimes. They’ve not only made St. Nicholas their “tooth fairy,” but once a year they commemorate the pirating of jolly ol’ San Nicola’s bones, sailing around the harbor at Bari with giant statues of the saint in their boats followed by a solemn harvesting of his tomb oils. Bari’s annual “Festival of the Translation of the Relics” is a three-day carnival with fireworks, processions, reenactments, fire-eaters, and Holy Mass, held every May 7-9. After High Mass on the 9th, the rector of the basilica crawls into a small opening in the crypt to drain the sacra manna out of St. Nicholas’ tomb into a glass vial. The manna is diluted with water and serves as an anointing sacramental and souvenir for pilgrims to Bari from across the globe.

But let’s not forget our own traditions about St. Nicholas. Here in America everybody knows that our Santa is a funny, fat, white-bearded egalitarian who gives kids whatever they want (and knitted sweaters from Grandma, that they don’t want) whether they were naughty or not, because he’s a nice, fair Santa. Our Santa will once again fill the world with holiday cheer and magic this 24th of December—toys for everybody, yes!

Irony aside, the biggest problem with a Turkish Santa Claus seems to be that it spoils the best-kept, sacrosanct secret in America. If children stop believing in the elfin Santa who flies down from the North Pole with his reindeer, won’t they stop getting presents? And if I tell my child different St. Nicholas stories, won’t it spoil Christmas for someone’s precious child when she hears my son tell her at school: “Santa doesn’t live at the North Pole. He sleeps by the Adriatic Sea sweating off myrrh for lame pilgrims.”

As in Aesop’s fable of the father, the son, and the donkey, you can’t please everybody. Telling the truth is not being a spoil-sport, it is evangelism, spreading the good news. The wonderful reality of St. Nicholas’ life is that he deeply loved Our Lord and so ardently believed Christmas is about the incarnation of God that he was willing to courageously confess it, at the risk of his own life. If out of love he accosted a deceived unbeliever, it’s because the real St. Nicholas was a man holy enough to be able to simultaneously defend the divinity of Christ and provide just, charitable reproof to a sinner. It was a privilege to be corrected by such a wise confessor of the faith, even if Arius was too foolish to receive it. “A rebuke goes deeper into a wise man than a hundred blows into a fool” (Proverbs 17:10).

Far from being considered unexciting or overly religious, treasured Catholic traditions and stories from around the world are delightfully assimilated by American youth. They love getting secret gifts from St. Nicholas on his feast day and from the Christ Child on Christmas, just as much as Catholic children in other countries do. We celebrate what we believe. My son loves celebrating St. Nicholas on December 6. It inspires his moral imagination and his jovial play; and by God’s grace it will also inspire him to imitate St. Nicholas’ virtues of love, generosity, courage, justice, and evangelism.

Tomorrow is the Feast of Saint Nicholas, so tonight is a big night for millions of Catholics. Celebrate with the Church, or abstain alone; St. Nicholas is coming to town!