Politics, Ideas, and the West 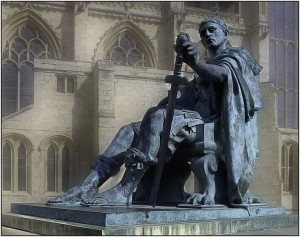 “Civilizations,” wrote the historian Arnold Toynbee, “die from suicide, not from murder.” Preventing the West from continuing to drift toward self-oblivion is surely a task—nay, a duty—of any principled conservative worthy of the name. In fact, as Margaret Thatcher was fond of saying, there is no alternative.
A central element in any lasting conservative resurgence is the defense and promotion of what we should unapologetically call Western civilization. By this, I mean that unique culture which emerged from the encounter of Jerusalem, Athens, and Rome, the brilliance of which—if I may be deeply politically-incorrect for a moment—is somewhat harder to discern in other societies.
As anathema as this culture may be in the contemporary faculty lounge, this is the tradition that conservatives should be in the business of safeguarding and advocating: not just in opposition to those who deploy violence in the name of a divine un-reason, but also against the obsessive egalitarianism, rank sentimentalism and wild-eyed utopianism of those who live inside the West’s gates but who have long inhabited a different mental universe altogether…
As the French theologian Jean Daniélou S.J. once observed, there is no true civilization that is not also religious. In the case of Western civilization, that means Judaism and Christianity. The question of religious truth is something with which we must allow every person to wrestle in the depths of their conscience. But if conservatism involves upholding the heritage of the West against those who would tear it down (whether from without and within), then conservatives should follow the lead of European intellectuals such as Rémi Brague and Joseph Ratzinger and invest far more energy in elucidating Christianity’s pivotal role in the West’s development—including the often complicated ways in which it responded to, and continues to interact, with the movements associated with the various Enlightenments.
Such an enterprise goes beyond demonstrating Christianity’s contribution to institutional frameworks such as constitutional government. Conservatives must be more attentive to how Judaism and Christianity—or at least their orthodox versions—helped foster key ideas that underlie the distinctiveness of Western culture. These include:
·         their liberation of man from the sense that the world was ultimately meaningless;
·         their underscoring of human fallibility and consequent anti-utopianism;
·         their affirmation that man is made to be creative rather than passive;
·         their insistence that there are moral absolutes that may never be violated,
·         their tremendous respect for human reason in all its fullness;
·         their crucial distinction between religious and civil authority; and
·         their conviction that human beings can make free choices.

This last point is especially important precisely because of the difficulty of finding strong affirmations of the reality of free choice outside orthodox Judaism, orthodox Christianity, and certain schools of natural law thought. Beyond these spheres, the world is basically made up of soft determinists (like John Stuart Mill) or hard determinists (like Marx).
There is, however, something more elemental of which modern conservatism stands in desperate need. In the first episode of his acclaimed 1969 BBC series Civilisation, the art historian, the late Kenneth Clark, sat in the foreground of an old viaduct and spoke about the Romans’ “confidence.” By that, he didn’t mean arrogance. What Clark had in mind was the Romans’ self-belief: their conviction that the ideas and institutions which they had inherited, developed, and extended throughout Europe and the Mediterranean amounted to a singular cultural accomplishment worthy of emulation.
Obviously the Roman world was far from perfect. As illustrated in the novel Satyricon, most likely written by the Roman courtier Gaius Petronius Arbiter during Nero’s disastrous reign, substantive decay had already set in among Rome’s elites by the first century A.D. What, however, seems difficult to dispute is the need for contemporary conservatives—however they prefix or suffix themselves—to develop and display a Roman-like confidence in the West’s achievements. For, absent such confidence, how will conservatives be able to re-infuse self-belief back into a West presently awash in soft despotism, nihilism, emotivism, and rampant self-loathing?
Read the entire article on the Intercollegiate Review website (new window will open).
Samuel Gregg is Research Director at the Acton Institute and author of, among other books, Becoming Europe and Tea Party Catholic.