Middle Eastern Christians are suffering between the hammer of Islamic jihad and the anvil of American-Israeli foreign policy.

by Christopher B. Warner 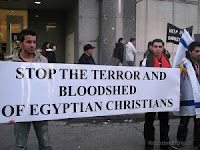 (Catholic World Report) Current events reveal a heartbreaking reality about Christians suffering in the Middle East. There seem to be very few authorities Middle Eastern Christians can turn to for basic human freedoms and protection.


Asia news reports that Ecumenical Patriarch Bartholomew is presently in Milan celebrating the 1,700 anniversary of the Edict of Milan (A.D. 313). Constantine the Great was the first Christian Emperor who decreed religious freedom for Christians and stopped the 300 year blood bath of early Church martyrs within the Roman Empire.

Bartholomew pointed out that instead of religious freedom, "With great sorrow today we see Christians, of all denominations, persecuted in many places, deemed enemies of society and the state; [we see that] the Christian faith is not tolerated in many countries and under many laws. Despite the progress apparently noted in the world with regard ... (read more)