Renowned liturgist and retired professor from the Pontifical Oriental Institute in Rome, Archimandrite Robert Taft, S.J., from his essay, Liturgy in the Life of the Church: 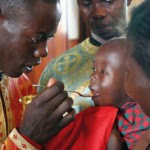 “Now, in the case of Christian Initiation, modern historical research and historical reflection have shown that the universal primitive tradition of both East and West viewed the liturgical completion of Christian Initiation as one integral rite comprising three moments of baptism, chrismation and Eucharist, and without all three the process is incomplete.
In Christian antiquity, to celebrate initiation without Eucharist would have made about as much sense as celebrating half a wedding would today.  For this reason, contemporary Western Catholic experts on the liturgy and theology of Christian Initiation have insisted on the necessity of restoring the integrity of this process which broke down in the Middle Ages. . .
From the beginning of the primitive Church in East and West, the process of Christian Initiation for both children and adults was one inseparable sequence comprising catechumenate, baptism, chrismation (confirmation) and Eucharist.  History is unmistakably clear in this matter:  every candidate, child or adult, was baptized, confirmed, and given Communion as part of a single initiation rite.  This is the universal ancient Catholic Tradition.  Anything else is less ancient and has no claim to universality.


For centuries, this was also the tradition of the Church of Rome.  In 417, Pope Innocent I in a doctrinal letter to the Fathers of the Synod of Milevis, teaches that infant initiation necessarily includes Communion:
“To preach that infants can be given the rewards of eternal life without the grace of baptism is completely idiotic.  For unless theu eat the flesh of the Son of Man and drink His blood, they will not have life in them.  [Note:  From the text, it is obvious that Innocent I is teaching principally that without baptism infants cannot be saved.  But the argument he uses from John 6:53, which refers to the necessity of eucharist for salvation, shows he simply took for granted that communion was an integral part of Christian Initiation for infants].”
That this was the actual liturgical practice of Rome can be seen, for example, in the 7th century Ordo romanus XI, and in the 12th century Roman pontifical, which repeats almost verbatim the same rule (I cite from the later text):
“Concerning infants, care should be taken that they receive no food or be nursed (except in case of urgent need) before receiving the sacrament of Christ’s Body.  And afterwards, during the whole of Easter Week, let them come to Mass, and receive Communion every day.”
Until the 12th century this was the sacramental practice of the Roman Church and the doctrinal teaching of Latin theologians.  Christ Himself said in John 6:53 that it was necessary for eternal life to receive his Body and Blood—“Unless you eat the flesh of the Son of Man and drink his blood, you shall not have life in you”—and the medieval Latin theologians applied this to everyone without exception, infants included.
The practice began to be called into question in the 12th century not because of any argument about the need to have attained the “age of reason” (aetus discretionis) to communicate.  Rather, the fear of profanation of the Host if the child could not swallow it led to giving the Precious Blood only.  And then the forbidding of the chalice to the laity in the West led automatically to the disappearance of infant Communion, too.  This was not the result of any pastoral or theological reasoning.  When the Fourth Lateran Council (1215) ordered yearly confession and Communion for those who have reached the “age of reason” (annos discretionis), it was not affirming this age as a requirement for reception of the Eucharist.  Even the 1910 decree Quam singulari issued under Pius X mentions the age of reason not as required before Communion, but as the age when the obligation of satisfying the precept begins.

Nevertheless, the notion eventually took hold that Communion could not be received until the age of reason, even though infant Communion in the Latin rite continued in some parts of the West until the 16th century.  Though the Fathers of Trent (Session XXI,4) denied the necessity of infant Communion, they refused to agree with those who said it was useless and inefficacious—realizing undoubtedly that the exact same arguments used against infant Communion could also be used against infant baptism, because for over ten centuries in the West, the same theology was used to justify both!  For the Byzantine rite, on December 23, 1534, Paul III explicitly confirmed the Italo-Albanian custom of administering Communion to infants.


So the plain facts of history show that for 1200 years the universal practice of the entire Church of East and West was to communicate infants.  Hence, to advance doctrinal arguments against infant Communion is to assert that the sacramental teaching and practice of the Roman Church was in error for 1200 years.  Infant Communion was not only permitted in the Roman Church, at one time the supreme magisterium taught that it was necessary for salvation.  In the Latin Church the practice was not suppressed by any doctrinal or pastoral decision, but simply died out.  Only later, in the 13th century, was the ‘age of reason’ theory advanced to support the innovation of baptizing infants without also giving them Communion.  So the “age of reason” requirement for Communion is a medieval Western pastoral innovation, not a doctrinal argument.  And the true ancient tradition of the whole Catholic Church is to give Communion to infants.  Present Latin usage is a medieval innovation.”
Source