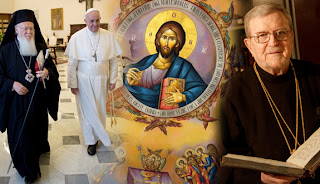 The April 22nd kidnapping of Syrian archbishops Mar Gregorios Ibrahim of the Syriac Orthodox Church and Paul Yazigi of the Greek Orthodox Church of Antioch, and the killing of their driver, has reminded us once again of the frailty of ancient Christian peoples living in the Middle East.
Over 1,000 Christians have been killed to date in the Syrian conflict and over 80 churches have been destroyed. The majority of Christians in Syria are Greek or Syriac Orthodox or Melkite Greek Catholic. This recent violence in Syria can remind us to pray for suffering Christians in the Middle East and afford us the opportunity to practice solidarity with our Greek Catholic and Orthodox Christian brothers and sisters.
Catholic World Report had the recent privilege of asking Archimandrite Robert Taft, S.J. for his perspective on current Orthodox-Catholic relations.
Fr. Taft has been the leading scholar in Byzantine liturgical studies for decades. Taft has devoted his life to preserving the liturgical treasury of the East and building bridges between Orthodox and Catholic Christians. As a young Jesuit, Taft first became interested in the liturgical traditions of the Christian East while teaching at the Baghdad Jesuit College in Iraq (1956-1959).
In 1963, Taft was ordained a Catholic priest of the Byzantine Slavonic (Russian) Rite. He is Professor-emeritus of Oriental Liturgy at the Pontifical Oriental Institute, Rome, where he received his doctorate in 1970 and remained to teach for 38 years. The Oriental Institute is the most prestigious institute in the world for Eastern Christian studies.
A prolific writer, his bibliography comprises over 800 articles and 26 books including: A History of the Liturgy of St. John Chrysostom (vols. II-VI), Orientalia Christiana Analecta, Rome, 1978-2013. Several of his writings have been translated into other languages.
He is the personal friend of many prominent Orthodox scholars, living and deceased, like Fr. Alexander Schmemann and Fr. John Meyendorff. He has many friends and ties to the Russian Orthodox community, where he is admired and respected. For example, he directed the doctoral studies for both of St. Vladimir Seminary’s liturgical professors: Paul Meyendorff and Fr. Alexander Rentel.
CWR: Fr. Robert, thank you very much for your willingness to share with us some of your recent thoughts on Eastern Christian ecumenism.
Many people who are sensitive to Orthodox-Catholic dialogue noticed that when Pope Francis appeared on the balcony a month ago, he was not only very humble, but spoke of the Church of Rome as the church “which presides in love” and referred to himself as the bishop of Rome concerned for the Christians of Rome. These past few weeks he has definitely set the tone for his pontificate.
This quotation from the second century letter of St. Ignatius of Antioch to the Roman church, “which presides in love,” could not have been coincidence considering Pope Francis’ noteworthy sensitivities to Eastern Christian ecclesiology. Plus, the historically unprecedented response to Francis’ election in the form of Ecumenical Patriarch Bartholomew’s attendance at the papal installation mass seems to mark Pope Francis as another welcomed bridge builder between East and West. As an aside, I think it is beautiful that pontifex means “bridge-builder” in Latin. Perhaps Pope Francis will bring a new understanding of that title through his ecumenical dialogue and his local focus on the duties of the bishop of Rome? Could you comment on how you see Pope Francis’ humble “style” will be viewed by Orthodox Christians?
TAFT: Pope Francesco is making a wonderful impression on most of the world by just being himself, the self of a real Christian in love not with himself or his image but with what real Christians love just as God does: God and all His creatures He died to save, especially the poor and needy and downtrodden. This has come across clearly to all of us, including Orthodox I know, who as real Christians can spot a fellow-Christian a mile away.
In addition, even more interesting from the ecumenical perspective is Francesco’s emphasis on his primary title, “Bishop of Rome.” Because a prelate’s title to his primacy comes from his local primatial see, not from some personal or super-imposed ecclesiological distinction. I can’t imagine that any of our attentive Orthodox observers have missed that!
CWR: Most Catholics probably envision future unity between the Orthodox Churches and the Catholic Church as a re-installment of one world Church organization with the pope of Rome at the top of the governing pyramid. A look at history shows that such a model never existed, so what could Orthodox-Catholic communion actually look like if it were achieved? - A renewal of Eucharistic communion? - The possibility of an eighth ecumenical council? - A resolution for the dating of Pascha/Easter?
TAFT: What it would look like is not a “reunion” with them “returning to Rome” to which they never belonged anyway; nor us being incorporated by them, since we are all ancient apostolic “Sister Churches” with a valid episcopate and priesthood and the full panoply of sacraments needed to minister salvation to our respective faithful, as is proclaimed in the renewed Catholic ecclesiology since Vatican II and enshrined in numerous papal documents from Paul VI on as well as in the wonderful Catechism of the Catholic Church. So we just need to restore our broken communion and the rest of the problems you mention can be addressed one by one and resolved by common accord.
CWR: According to the most recent joint statement of the North American Orthodox-Catholic Theological Consultation (2010), future communion would include several key elements:
· Mutual Recognition: The numerous Orthodox Churches and the Catholic Church would have to ‘explicitly recognize each other as authentic embodiments of the one Church of Christ, founded on the apostles…’
·  A Common Confession of Faith: The ‘Filioque’ ought to be dropped in order to reflect the common Confession of Faith ‘canonized at the Council of Constantinople in 381…’
·  Accepted Diversity: Orthodox-Catholic Christians would ‘live in full ecclesial communion with each other without requiring any of the parts to forego its own traditions and practices’

·  Liturgical Sharing: ‘Members of all the Churches in communion would be able to receive the sacraments in the other Churches…’

·   Synodality/Conciliarity: ‘… Bishops of all the Churches would be invited to participate fully in any ecumenical councils that might be summoned.
Synodality would operate at various levels of ecclesial institutions: local, regional and worldwide…’

·  Mission: ‘…As sister Churches, they would also engage in common efforts to promote the realization of a Christian moral vision in the world.’

·  Subsidiarity: Those elected to major episcopal or primatial offices would present themselves to other Church leaders at their level…’

·  Renewal and Reform. They would ‘commit themselves to continuing [Christian] renewal and growth – together…’

The statement goes on to say, “Conscience holds us back from celebrating our unity as complete in sacramental terms, until it is complete in faith, Church structure, and common action.” Can you clarify what you mean by, “We just need to restore our broken communion and the rest of the problems you mention can be addressed one by one and resolved by common accord”? It seems like we already have ‘mutual recognition’, ‘accepted diversity’, and ‘mission’; what is the next step and how many steps will it take before we get to ‘liturgical sharing’ which is what I think of when you say, “broken communion?”

TAFT: Yes, much that is put forward in this excellent historic document is already a reality or on the way to being so. For instance there is no “Filioque” in the Creed Russian Catholics chant in our Slavonic liturgy, and some years ago Rome issued a clarification of its Trinitarian belief about which the late French Orthodox theologian Olivier Clément said if that is the Catholic teaching on the issue then the problem has been resolved. As for “ecumenical councils,” the Catholic Church might specify more clearly its list of those, which as far as I know we have never defined. Are the purely Roman Catholic post-schism councils to be considered ecumenical councils of the undivided Church? If so, says who?