Elrond the Starets and Frodo the Hesychast: Eastern Christian Reflections on J.R.R. Tolkien

I have been listening to J.R.R. Tolkien’s The Lord of the Rings on CD during my daily commute. In my opinion, this is the great English novel of the 20th century.

Tolkien has to be read according to his own criterion. He has recreated a writing style that is, in a sense, ‘ever ancient, ever new.’  Within the opus of creating a mythology for England he has written a pre-Christian, Anglo-Saxon-like epic in modern English -within the framework of a Christian (non-pagan) worldview – an unprecedented literary feat. 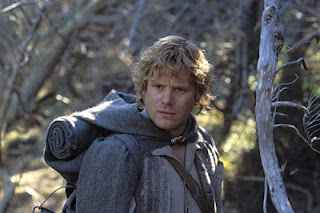 In Book IV - making headway with Frodo, Samwise, and their gangly companion toward Mordor, I have been contemplating Tolkien’s spiritual insights into human nature.

This is my seventh reading and each time I see more of Tolkien's genius.

I was struck by something Frodo says to Faramir when they are about to part company in the fair woods of Ithilien.

He remarks that Faramir’s friendship was a beautiful good, unlooked for, along the path of his dark mission, and he recalls that Elrond had foreseen that such an encounter would take place.

This is an analogy of the spiritual life and the role spiritual direction can play. Elrond shares his wisdom from previous journeys; Frodo experiences something we have all experienced – the encounter of something good or hopeful where we expected to find the opposite, because God gives us consolation in His own timing – often when we least expect it. That is one of the ways we know it is from Him, and not our own projection of divine encounter.

Tolkien disliked explicit allegory, but his stories, like any work of beauty, can certainly be read allegorically because his characters experience the same struggles and emotions that we experience. For example, Frodo’s struggles with evil are paralleled by our own human struggles. Christian warrior saints in particular, like hobbits, are little (anawim) but tough…

After the breaking up of the fellowship, Frodo and Sam adopt a most unlikely guide. Gollum represents so many themes: human hope through conversion and redemption, the fact that God can bring good out of evil, and the humble truth that, as fallen creatures, we all have a good-side and a bad-side that must be subdued.

Frodo pities Gollum because Frodo sees himself in this miserably tormented creature - what Frodo could be if he did not resist the evil impulses that threaten to darken his mind. His hope and belief, that Gollum still has goodness in him and can be saved by kindness and good will, is a projection of similar hopes for himself – that he may somehow survive the checkered journey.

As they approach the gates of Minas Morgul, Frodo, pulled by the ring around his neck, stumbles wildly toward the bridge into the city, heedless of his peril. Sam has to run after him and hold him back. The Greek Fathers called this impulse, epithymia - the storms of the passions which can stir with irresistible might within us. 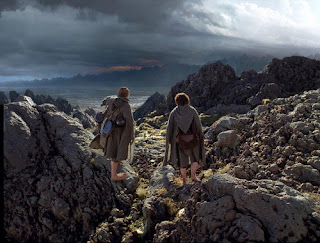 As Sam pulls Frodo back toward the hidden stairs that traverse the ancient city, Frodo and Sam are frozen in their tracks by the sudden issuing of a dark army.

They are hidden by their elven cloaks, but once again Frodo is tempted to reveal himself to the evil powers; but this time he overcomes the urge and finds strength in grasping the vial of Galadriel close to his heart.

This refocusing of Frodo’s mind upon ‘light’ turns aside the thoughts of the nazgûl captain who pauses at the bridge.

The name of Jesus and the sign of the cross have that same power, which is why the Greek Fathers advocated the perpetual recitation of the “Jesus Prayer” and the use of that profound Christian gesture in times of temptation.

Throughout the novel, sometimes Frodo has the strength to resist evil temptation, and sometimes the passions aroused by the presence of the ring seem too much for his hobbit will, strong as it is. On Weathertop, in Book I, he makes the grave mistake of putting the ring on and is consequently revealed to the nazgûl and stabbed in the shoulder with a fell blade; but he matures through this experience, as warriors do. He gleans a proper respect for the power of the enemy and his own frailty as a mortal.

Faced by overwhelming adversity, we sometimes lose sight of hope. Yet … The light shines in the darkness and the darkness has not overcome it!  Even when we think there is no way out, except through capitulation and cooperation with evil, His grace is always sufficient for us to ‘do good and avoid evil’ - if we turn our hearts toward the transfigured light of Christ, with courageous resolve, and call upon His victorious name.